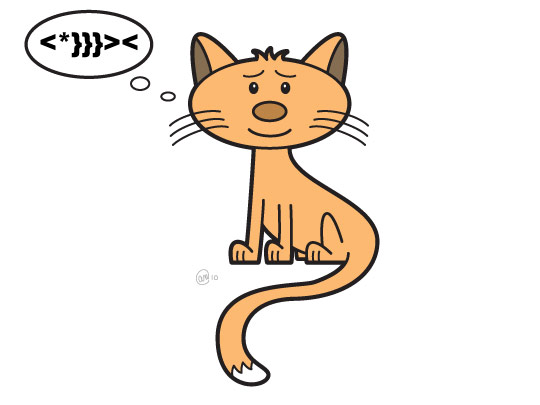 Starting the new year off, with memories from years long ago.  The image above came in my mind very vividly, while drawing with my daughter.  While working in Illustrator to create the vector version of the drawing, I recalled a cat from when I was a boy.  I was probably about six or seven at the time, and some neighbors had some kittens.  I proudly purchased one for five cents, one shiny nickel, which was a small fortune to a small boy at the time.  Proudly, I marched home with the kitten, and proclaimed that I had paid for the cat and could not return it.  My parents where good sports, and let me keep the cat.  UT, the cat, remained a faithful family pet for many years.  He was the best five cent purchase I ever made.

Originally, I did not have the text characters in the drawing, but rather a simple fish skeleton.  Being the creative type, it occurred to me to wonder what message a cat might want to relay to their family.  I figured it would most likely be a meal request.  Texting for animals will be the next big thing in 2010, or Twitter for pets, perhaps I could be wrong, but it’s highly unlikely.