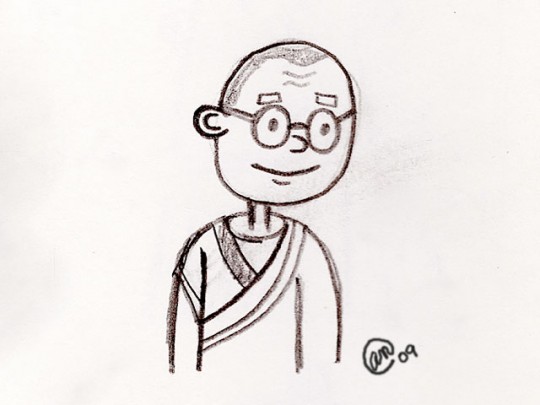 Today His Holiness the 14th Dalai Lama joined Twitter( http://twitter.com/DalaiLama ).  I had the opportunity to see and listen to him speak on Sept. 24th 2009 in Memphis, TN.  It was a small auditorium that seated only around 3 or 4 thousand people, so the tickets were expensive.  I decided at the last minute to go, due to only finding out he was in town the night before because of a blunder by one of our local elected officials in greeting him.  I rarely watch the local news.  I have an unpredictable work schedule and very limited extra funds these days.  So many things worked out just right to enable me to get the opportunity to hear him speak in person.  I released all attachments to the outcome of being able to find a last minute ticket at the venue, especially the afternoon of the event(they had already quit selling tickets for the event on line).  I was able to get one of the final 20 remaining tickets, and had brought just enough money to pay for it, since it was one of the more expensive ones.  After heavy security checks, we all took our seats and waited.  I again decided to release any attachment to expectations of the speech.

He spoke in a very casual manner.  The Dalai Lama at once puts you both at ease and commands your utmost attention.  His laughter is infectious, and you can not help but smile with him.  He would make a point, and often it seemed like I had at once know it all along to be true.  He says that we all want to be happy and avoid pain, both physical and emotional.  He also adds that you should not read anything extra into his words, because he is just a simple Buddhist monk.

I drew the sketch above later that same afternoon.  On the drive home, after his speech, there was a rainbow.  I did not turn the radio on, but rather just enjoyed the sounds of the city, and was thankful.

I hope to be a simple artist one day.